skip to main | skip to sidebar

A story of two Rashi Tehillim

There are now at least two major editions of the Psalms with commentary by the medieval master Jewish commentator Rashi. One is published by the Jewish Publication Society (reprinted by Brill) and is by Mayer Gruber of Ben-Gurion University. It is a 900 page paperback volume and you can buy it from Amazon for $34. The second is also 900 pages but in two hardcover volumes in a slip case published by the Feldheim published by Rabbi Yisrael Isser Zvi Herczeg (who teaches at two traditional yeshivos in Israel: Yeshivos Yesodei HaTorah and Lev HaTorah. You can buy this set from Amazon for $36.

Physically the Herczeg volumes are much nicer -- they have better and larger paper and they are larger, smyth-sewn bindings with dust jackets, in a nice case. On the other hand, they are much larger, as these photos show (please click on the photos to see larger images -- and click on the magnifying lens to read the individual text):

But the biggest difference is with the format of presentation. In Gruber, the texts of the Psalms is not presented (in English or Hebrew.) The Rashi is given in block format at the end of the book (here is the Rashi to Psalms 1 and 2, and the first part of Psalm 3) (remember to click to see a larger, more readable image): 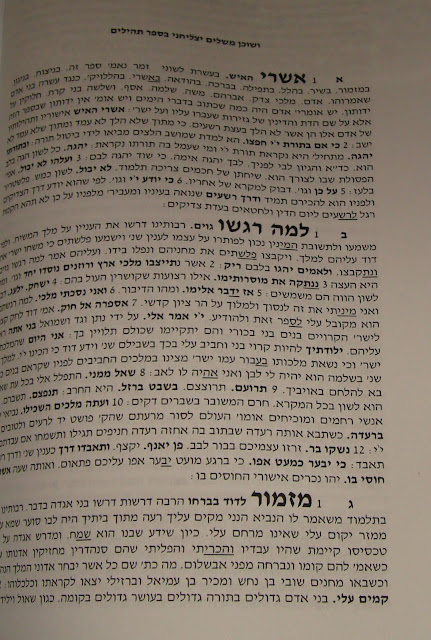 And here is his English translation of Rashi, followed by notes: 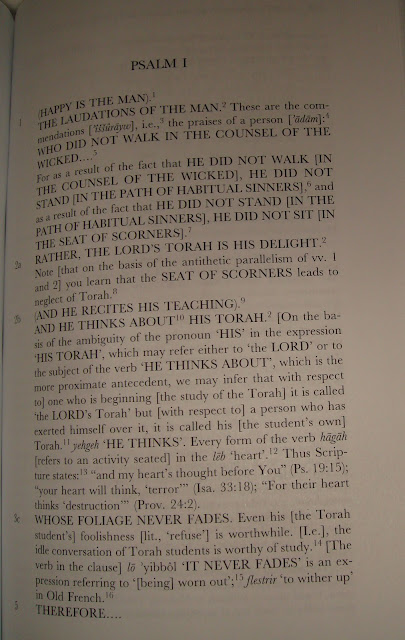 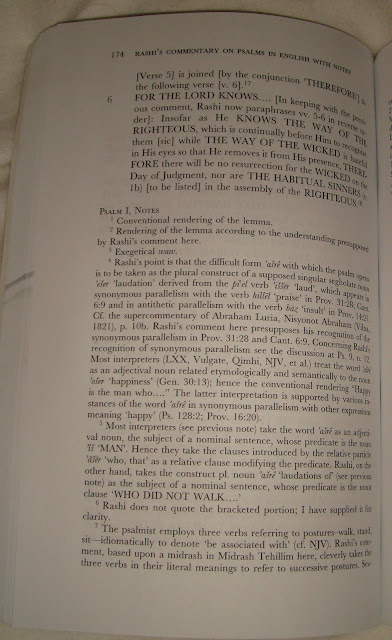 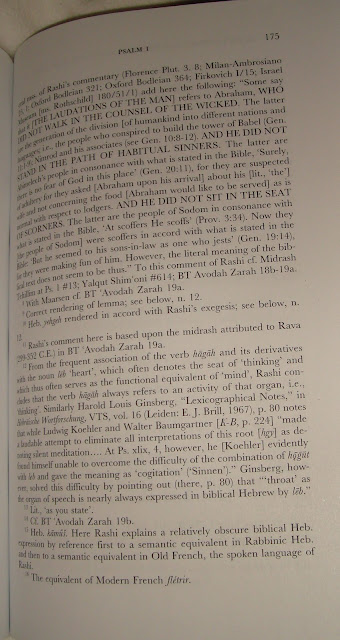 Now in contrast, here is Rabbi Herczeg's text for the same psalm -- you'll notice that the Hebrew psalm, the English translation, the Rashi in Hebrew, the Rashi in English, and the notes are all on one self-contained page (again, click to see a zoomed in view.) 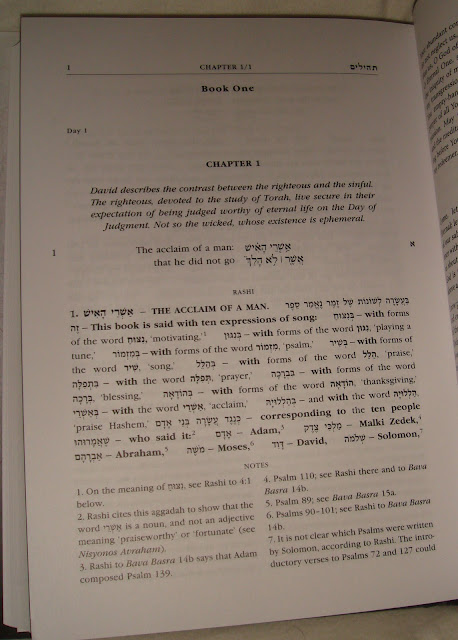 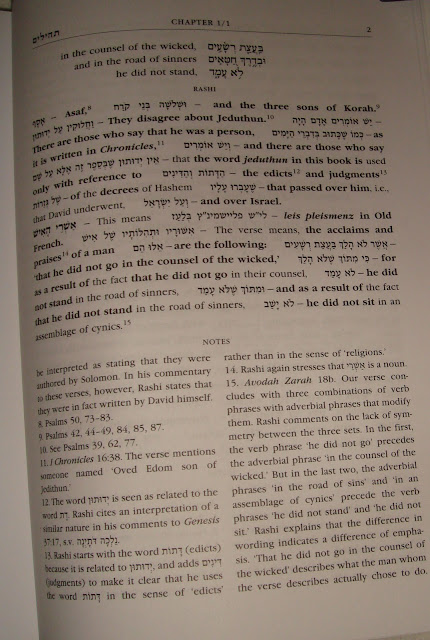 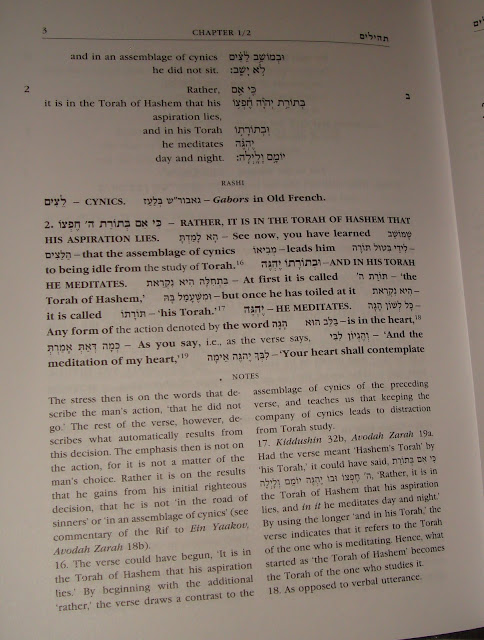 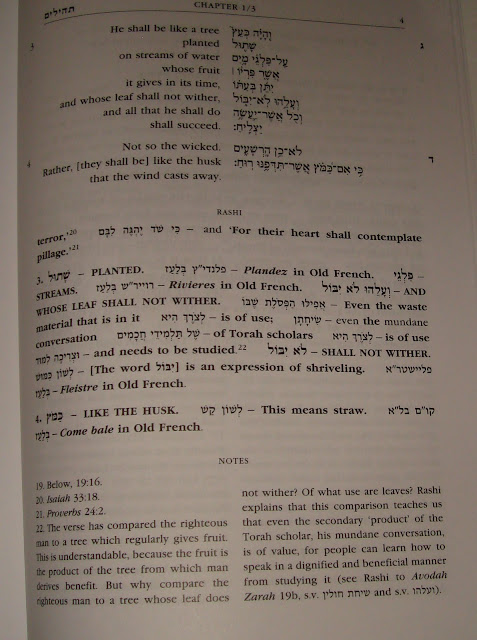 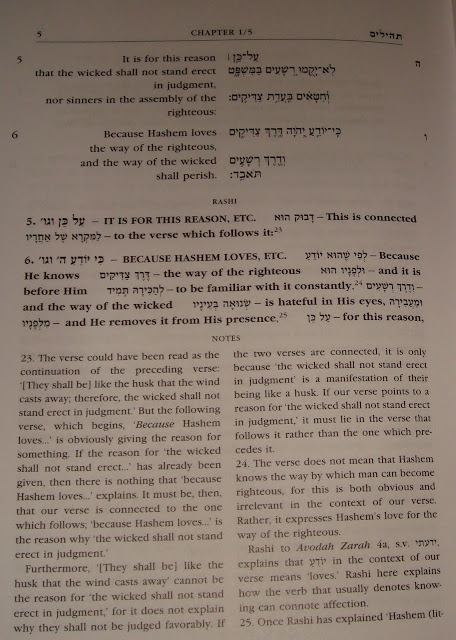 A couple of notes:

The most obvious difference is formatting.  The R' Herczweg volumes integrates Rashi (in both pointed Hebrew and English), the super-commentary, and the actual text of the Psalms (again, in both pointed Hebrew and English) on a single page.  Gruber omits the text of the Psalms, separates Hebrew Rashi (unpointed), and even separates notes and translation.  There is little doubt that R' Herczweg has both more beautiful typesetting and the more useful layout.

The versions of Rashi's manuscripts used is slightly different in places. For example, Gruber has Rashi making a comment on Psalm 118:5. In the case of R' Herczweg, he demotes the comment to his supercommentary notes -- making full note of the source of it, and and its exegesis, before explaining why it is probably spurious. In general, R' Herczweg treats his Rashi text critically and applies it to integral whole psalms, while Gruber is content to split up psalms with "Interpretation A" and "Interpretation B" (e.g., see pp. 671-675).

R' Herczeg provides full pointed text for the Psalms and for Rashi -- and gives a phrase-by-phrase translation (sometimes with explanatory interpolations, clearly marked typographically). As opposed to Gruber who is willing to shift around Rashi's text (and make a note in the footnotes), R' Herczeg respects the integrity of Rashi's text.

For some reason Gruber does not often address the Old French terminology used by Rashi -- for example, in Psalm 1 above, Rashi uses three old French phrases: Gabors, Fleistre, and Come bale. R' Herczeg deals with all three; Gruber only with Fleistre (and then, only in Modern French.)

In general Gruber has a less literal translation of Rashi than R' Herczeg.

Gruber has some much longer notes than R' Herczberg, but they do not necessarily contain substantially more information. As an example, here is the supercommentary note to Rashi's תשובת המינים (translated as "heretics" by R' Herczeg and "Christians" by Gruber. Recall that the former has the actual Hebrew on the page, so there is no possibility of missing it.

R' Herczeg: That is, to Christians, who interpret the psalm as referring to their false messiah.

Gruber: Heb. tesubat hamminim; so correctly Signer, p. 274; see the extensive evidence that in Rashi's commentaries minin (or minim) means "Christian" in Awerbuch, Christlich-judische Begegnung im Zeitalter der Fruhscholastik, pp. 101-139. E. Touito, "Concerning the Meaning of the Term tesubat hamminim in the Writings of our French Rabbis," Sinai 99 (1986) pp. 144-48 (in Hebrew) demonstrates on both linguistic and historical grounds that in the writings of Rashi and his disciples tesubat hamminim often means "a challenge to the Christians" rather than "a reply to the Christian". The rendering here "Jewish converts to Christianity" found in Hailperin, Rashi and the Christian Scholars [sic., Gruber does not properly format the title name], p. 60 is no longer tenable. Solomon Zeitlin, "Rashi," American Jewish Yearbook 41 (1939-1940), p. 124 writes as follows: "I examined a manuscript in the library in Moscow in which the reading of this passage is as follows: 'Many of the disciples of Jesus apply this passage to the Messiah, but in order to refute the Minim this passage should be applied to David.' " This version of Rashi demonstrates conclusively that Heb. minim here can only mean "Christians". Moreover, it supports the idea tha thte search for the literal meaning [pesuto] by Rashi and the real, original meaning [pesat] by Rashi's disciples was motivated by the belief tha the Bible understood on its own terms would demonstrate that Judaism rather than Christianity is the only legitimate heir to the legacy, which is commonly called "the Old Testament"; see, in addition to the important literature cited by Signer, p. 273, n. 3, Touito, "The Exegetical Method of Rashbam Against the Background of the Historical Reality of His Time," pp. 48-74; Sarah Kamin, Rashi's Commentary on the Song of Songs and the Jewish-Christian Polemic," SHNATON 7-8 (1984), pp. 218-48 (in Hebrew); Shereshevsky, Rashi: The Man and His World, pp. 119-32. Rashi here suggests that it was not science for science's sake that led him to point out that in Biblical Heb. masiah is not an allusion to the eschatological "King Messiah" of late Second Temple era and later Judaism but simply a synonym of the noun melek "king"; see Rashi also at Ps. 105:15. That Rashi should have found it necessary to differentiate the Christian belief that mesiho in Ps. 2:2 refers to "His Messiah" can be explained as follows: in the LXX masiah, lit., "Annointed One is christos (similarl in the Vulgate, christus). Moreover, the New Testament Book of Acts 4:25-27 declares explicitly that Ps. 2:1-2, which asks, "Why did the Gentiles rage ... against the Lord and his christos," refers to there having been "gathered together against ... Jesus ... both Herod and Pontius Pilate, with the Gentiles and the People of Israel" (Acts 4:25-27; RSV). While a comparison of eisegetical tradition may be serviceable in interfaith dialogue, the defense of the contention that Jewry rather Christendom was the legitimate child of Hebrew Scripture made it necessary for Rashi and his disciples to seek out the primary meaning of the biblical word and to show that this supported the Jew's adherence to the ancestral faith rather than the adoption the Christian faith. Note that Rashi's demonstration that mesiho in Ps. 2:2 denotes "HIS ANNOINTED KING" resets upon 2 Sam. 5:17, which refers to David's having been "anointed ... king."

As this example shows, Gruber is rather expansive in his comments (although they are riddled with serious and not so serious typographic errors -- I found two or three on every page). Herczeg just gives a more basic comment that let's you understand what Rashi is saying.

However, if you desire to read Gruber, I strongly suggest reading Gruber in conjunction with R' Herczeg -- since this allows you to at least follow the Hebrew wording of Rashi.

The books are nearly the same cost, and I think there is no contest in terms of physical quality or content -- R' Herczeg's is the one to get.

Happy studying of the Tehillim.
Posted by Theophrastus at Monday, April 26, 2010

As always, a very helpful post about a form of bible commentary I'm almost completely ignorant of.

What I Learned from Aristotle

Theophrastus
I am now posting, with friends, at the group blog BLTnotjustasandwich.com